The March 18 launch of Russia’s Soyuz MS-21 – mentioned in an earlier Aerospace Perceptions update – has taken a turn for the surprising. After a fully nominal, brief two-orbit chase of the International Space Station, the Soyuz Korolyov spacecraft docked with the ISS. Hatches opened – and things took a turn toward the unexpected.

The three-man crew of the mission boarded the ISS wearing bright yellow and blue flight suits – the unmistakable colors of the Ukrainian flag. 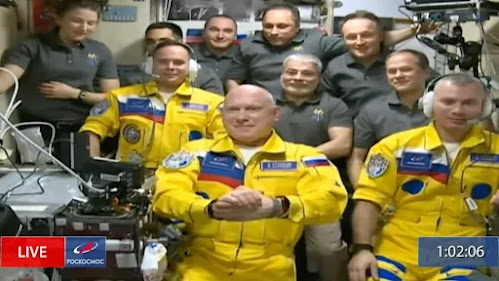 Russian cosmonauts Sergey Korsakov, Oleg Artemyev and Denis Matveyev speak upon their arrival at the ISS, in a video broadcast by the Russian space agency. Video image: Roscosmos

Rampant speculation commenced. Was this the orbital equivalent of holding up a “No War” sign on Russian state television? How could the crew of the Soyuz stow away unofficial gear in the cramped confines of their vehicle? Was this a semi-official Roscosmos statement expressing anger over the financial impact Putin’s folly will have on the Russian space program? If Roscosmos was horrified by a crew protest, why did they allow video of the impertinence to stream out before the eyes of the world?

What was certain is that such colors have never been worn by any other Soyuz crew arriving at the ISS. When asked if the colors had special significance, mission commander Oleg Artemyev demurred.

“It became our turn to pick a color. But in fact, we had accumulated a lot of yellow material so we needed to use it. So that’s why we had to wear yellow,” he said.

Actions speak louder than words? Or perhaps an old truism says it best: a picture is worth a thousand words.