The "Off Nominal Situation"

Shortly after 10:30 am EDT this morning, the aerospace world received a stark reminder that launching spacecraft can be a risky proposition with unexpected results.

64 seconds into the 23rd flight of Blue Origin’s New Shephard program – so named for pioneering US Mercury program astronaut Alan Shephard – the unmanned vehicle failed and was quickly enveloped in a column of flame as the capsule escape system initiated. The rocket had just passed through the point of maximum aerodynamic pressure, accelerating at over 700 mph and nearing 28,000 feet in altitude. 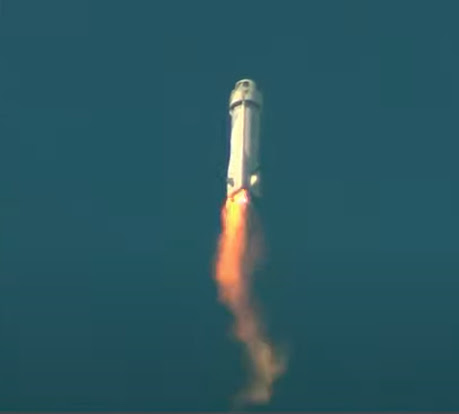 The first sign of trouble as the New Shephard rocket's plume takes on an uncharacteristic form just after Max-Q, where aerodynamics forces on the vehicle reach their peak. From Blue Origin video feed.

Before today, New Shephard had been viewed as a consistently reliable, single-engine rocket. Media coverage had normalized launches of the vehicle from Blue Origin’s West Texas base in the wake of its first manned flight just over a year ago. That initial crewed launch sent Amazon magnate and Blue Origin founder Jeff Bezos, along with three others, on a suborbital trip that climbed to 66 miles in altitude, with the entire flight clocking just over ten minutes from launch to landing. Since that first manned venture, 27 more passengers – including William Shatner – had ridden in a New Shephard capsule, known in part for its space-tourism-friendly large windows. Todays uncrewed flight was described by Blue Origin as a mission to “loft 36 payloads from research institutions and student organizations, half of which are funded by NASA.” 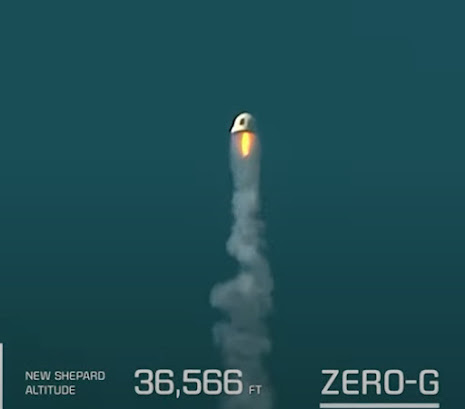 Here the crew escape system has separated the capsule from the rocket, the vehicle still climbing before descent initiates. From Blue Origin video feed.

The good news: it may have been totally unplanned, but it appears the crew emergency separation system did exactly what it was designed to do had this been a manned flight. Of course, how this will impact the costly desirability of riding a rocket in pursuit of the ultimate tourist adventure remains to be seen. 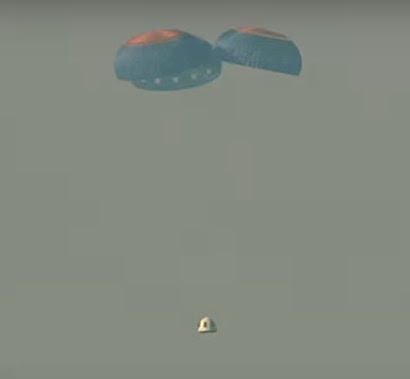 The capsule's drogue parachutes were functional before giving way to the main parachutes seen here, used to slow the capsule to its final landing speed. From Blue Origin video feed.

You can watch video of today’s “off nominal situation” on YouTube. Fast forward to 1:20:14 for the final 30 seconds of the countdown followed by the aborted launch.