How Low (Observable) Can You Go?

Late last month what is arguably the first major East Coast air show of 2022 took place at Dover Air Force Base. And “Thunder Over Dover” certainly qualifies as major, having hosted both the U.S. Air Force Thunderbirds and the U.S. Navy Blue Angels across a practice show day and two public show days.

In the relatively near future, I’ll post a link to a photo album of the very best of over 1000 (!) images captured during the three days I spent at Dover Air Force Base.

But if any single aircraft could be considered the star of the Dover show it’s the B-2 Spirit, popularly known as the Stealth Bomber. 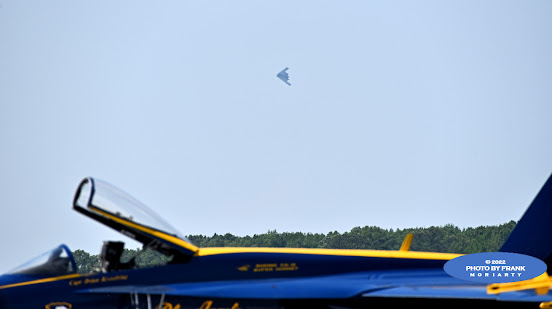 The B-2 Spirit stealth bomber banks over Blue Angel 1 for a final pass at Thunder Over Dover on May 21, 2022.
Photo: Frank Moriarty/Aerospace Perceptions

The appearance of a B-2 at air shows always generates excitement, and the three passes by this unique aircraft at “Thunder Over Dover” – present on May 21 only – drove a massive attendance turnout despite high temperatures well into the 90s. 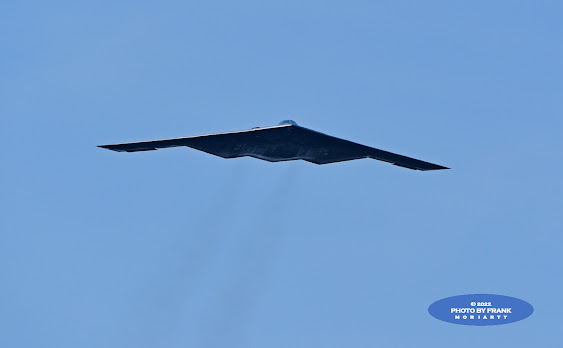 The B-2 "Spirit of Nebraska" passes over the awestruck airshow crowd below.
Photo: Frank Moriarty/Aerospace Perceptions

Built by Northrop Grumman, the B-2 first flew over 30 years ago, but despite being one of the most recognizable modern-day aircraft a noticeable hush fell over the crowd assembled at Dover AFB as the massive black boomerang made several passes along the flight line.

Despite the B-2’s popularity with the general populace, by the time the next airshow at Dover Air Force Base rolls around on the calendar it’s likely that a new generation of stealth will be coming into service. The all-new B-21 Raider – also being built by Northrop Grumman – will be the result of a program to create the next-generation stealth bomber. Assembly of the first B-21 is nearing the stage where engine runs and taxi testing will lead to a first flight. The ground testing is now planned for later this year, with flight following in 2023. Initially flight testing was hoped for right about now on the calendar, but ironically on the day before the B-2 soared over Dover the Air Force announced this new testing timetable.

When the first B-21 is seen, the vision will look quite familiar at first glance. Retaining the B-2's overall shape, the Raider will have ample long-range capability even though it will be smaller than the B-2. Most important, though, the B-21 will boast new generations of what the Air Force refers to as “low-observable technology” – in another word, stealth. 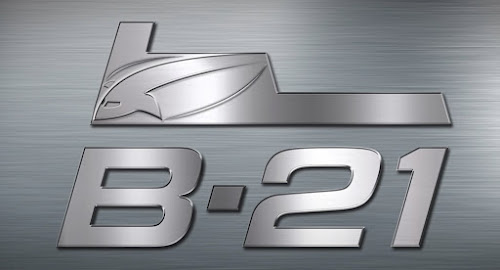 Development logo of the B-21 Raider.