Aerospace Perceptions closed out 2022 acknowledging the final Boeing 747 ever built, while looking back at some of that great platform’s many variations.

So, it seems appropriate enough to start 2023 with a look at one more 747 variation – one I was happily reminded of during an early 2023 commercial broadcast during Monday Night Football.

GE Aerospace has long depended on the 747 platform for in-air engine testing. In fact, the 2018 retirement of GE’s first 747 test aircraft marked the conclusion of that plane’s 49th year in the skies, as it was the last flying example of the very first 747 model. That hardy 747-100 flew for Pan Am from 1969 until 1991, when it “retired” into a life with GE for 24 more years! 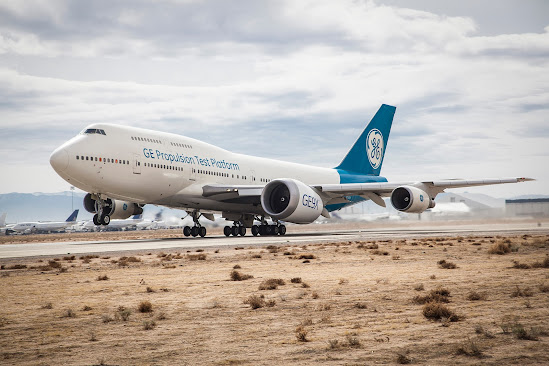 One of these engines is definitely not like the other one. The modern GE9X engine undergoes flight testing mounted to the inboard positions of GE’s Propulsion Test Platform 747 test plane. Photo: GE Aerospace

More recently – and starring in GE’s current round of broadcast commercials – the aerospace company relies on the “GE Propulsion Test Platform” seen above. Acquired by GE in 2001, this 747-400 served as the testbed for the state-of-the-art GE9X jet engine powering Boeing 777X aircraft. The expanded dimensions of this large turbofan engine are easily noted in the photograph, with the GE9X dwarfing the outboard standard-size 747 engine. 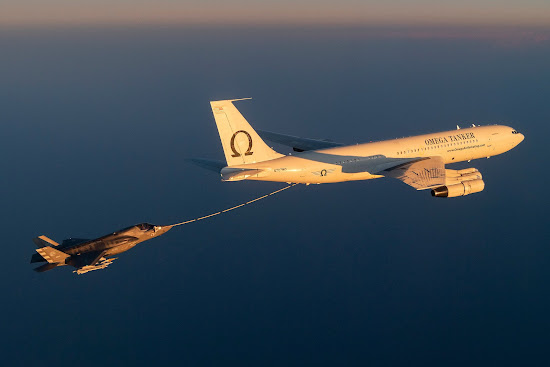 A thirsty F-35 has a rendezvous with one of Omega’s tanker aircraft. In addition to the Boeing 707 platform seen here, Omega also fields DC-10 tankers with a greater fuel capacity. Photo: US Navy

Amazingly, there are even variations of older-yet-fully-reliable aircraft still regularly pressed into service, like the above jet operated by Omega Aerial Refueling Services. Omega is the first commercial entity to offer air-to-air refueling services, and among its fleet is the “Omega Tanker” seen here. Yes, it’s based on the venerable Boeing 707, an aircraft which first entered commercial service back in 1958. Omega supplements the refueling capabilities of our armed forces, providing support to Navy and Marine Corps aircraft ranging from the F-35 to the V-22 – and even the unmanned experimental X-47B.